The Richardson Health Department plans to ground spray one area (schedule and map provided below) beginning this Wednesday, weather permitting, to help prevent the spread of the West Nile virus. The decision to spray comes after City Health Department workers were notified that a trap located within the subject spraying location returned mosquitoes that tested positive for carrying the disease.

The City began collecting test samples on a weekly basis in April.

Spraying Location
Weather permitting, spraying will occur according to the following schedule: 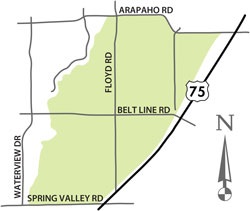 *As part of plans to increase the response to incidents of finding the West Nile virus in mosquito traps, targeted neighborhoods are sprayed twice. **Spraying events begin at 9 p.m. and will end by 4:30 a.m.

If wind speeds of greater than 10 mph are sustained or if it is raining, or if temperatures are forecast to drop below 50 degrees Fahrenheit, then Health Department staff may postpone spraying until weather conditions are more favorable.

Increased Surveillance
Richardson is working in conjunction with other cities and health agencies in the Metroplex to mitigate the spread of West Nile virus. Additional measures being taken in Richardson include:

Why the City Sprays for Mosquitoes
The Health Department uses pesticide in order to help prevent the spread of mosquito-borne disease transmitted by adult mosquitoes. The most concerning of these is the spread of the West Nile and Zika viruses that are proven to be harmful and even deadly in some cases. The pesticide used to help control the mosquito populations is applied by using a truck-mounted ultra-low volume (ULV) sprayer that puts out only small amount of pesticide. ULV sprayers dispense extremely small droplets that stay airborne as long as possible and drift through an area above the ground killing the mosquitoes in the air on contact. The small droplet size makes the pesticide more effective, which means less pesticide is used to better protect people and the environment.

Impact of Spray on Health and the Environment
Use an EPA-registered pesticide that is proven as one of the fastest and best options to control mosquito populations. The Environmental Protection Agency (EPA) reports the chemical used by health workers has been fully evaluated by EPA researchers and it does not pose a risk to people or the environment in the way that it is applied. Extensive scientific research has been conducted by academia, industry, and government agencies to identify the appropriate droplet sizes used to ensure public safety, and the equipment nozzles used also undergo rigorous testing to properly distribute the mist when used.

How Spraying Locations are Chosen
The Richardson Health Department schedules mosquito spraying based on positive findings of West Nile virus in mosquito traps placed around the city. Once located, the area around the positive finding is targeted for spraying in an attempt to help limit the spread of the disease. In an effort to decrease the incidents of finding the West Nile virus in people and mosquito traps, targeted neighborhoods are being sprayed twice as part of a comprehensive plan implemented in early 2013 to help deter the spread of the disease. However, spraying is only a measure to help limit exposure, and health workers urge people to maintain vigilance in protecting themselves when going outside.

When Spraying Occurs
The Health Department schedules spraying events during overnight hours to limit exposure to people who may wish to avoid contact with the pesticide used to control mosquito populations. Spraying events begin at 9 p.m. with the goal of ending by 4 a.m., though they may run until 4:30 a.m. depending upon the size of the spray area.

Trucks Spray According to EPA Standards
Trucks used by the Health Department and its contractors are equipped with GPS-based controllers (one city truck and all contractor trucks are GPS equipped) that vary the volume of chemical released based on the truck’s speed, up to about 22 mph. The volume of spray is calibrated to release the amount of chemical that has proven effective at killing mosquitoes and conforms to standards set by the Environmental Protection Agency.

Spraying is One Part of the Protection Plan
Spraying to control the population of mosquitoes and the spread of the West Nile virus is one component of a comprehensive plan the Richardson Health Department follows to control the mosquito population. Other activities include: continuous monitoring of mosquito test pool results, implementation of a residential pool abatement program to reduce areas where mosquitoes can breed, treatment of storm drains, use of larvicide and mosquito-eating fish along creeks and other stagnant bodies of water to prevent mosquito larvae from developing into adults, monitoring and notification in neighborhoods where potential mosquito breeding areas are discovered, closer collaboration with regional health departments, and public education efforts through mass communications channels.

How to Protect Yourself
To protect from mosquito bites, people are asked to follow the Four D’s of protection:

Symptoms of West Nile virus vary depending upon the person who becomes infected. People who do develop symptoms usually suffer from mild "flu-like" illness. Rarely, symptoms may require medical care or hospitalization. The people who are most susceptible to the disease are the very young, the very old and those with weakened immune systems.