West Nile virus (WNV) is most commonly transmitted to humans by mosquitoes. You can reduce your risk of being infected with WNV by using insect repellent and wearing protective clothing to prevent mosquito bites. There are no medications to treat or vaccines to prevent WNV infection. Fortunately, most people infected with WNV will have no symptoms. About 1 in 5 people who are infected will develop a fever with other symptoms. Less than 1 percent of infected people develop a serious, sometimes fatal, neurologic illness.


The Richardson Health Department staff conducts mosquito control activities year-round but increases those efforts from April through October, the most active mosquito season in North Texas.

The Health Department works along with the Texas Department of State Health Services, Dallas County Health and Human Services Department and area health departments to conduct surveillance and testing of the mosquito population for diseases including West Nile virus. Monitoring for mosquitos occurs year round. 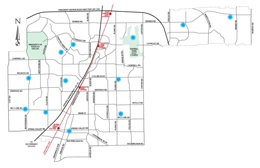 Mosquito control efforts include public education, using larvicide along creeks and other stagnant bodies of water to prevent mosquito eggs from developing into adults, and monitoring and notification in neighborhoods where potential mosquito breeding areas are discovered. The City practices integrated mosquito control with the intent to disrupt the mosquito life cycle in its early stages to eliminate the number of adults, and to eliminate mosquito breeding habitats through proper water drainage.

No symptoms in most people. Most people (70-80 percent) who become infected with West Nile virus do not develop any symptoms.

Febrile illness in some people. About 1 in 5 people who are infected will develop a fever with other symptoms such as headache, body aches, joint pains, vomiting, diarrhea or rash. Most people with this type of West Nile virus disease recover completely, but fatigue and weakness can last for weeks or months.

Severe symptoms in a few people. Less than 1 percent of people who are infected will develop a serious neurologic illness such as encephalitis or meningitis (inflammation of the brain or surrounding tissues).

West Nile virus is most commonly transmitted to humans by mosquitoes.

Additional routes of human infection have also been documented. It is important to note that these methods of transmission represent a very small proportion of cases:

West Nile virus is not transmitted:

The most effective way to avoid West Nile virus disease is to prevent mosquito bites. Be aware of the West Nile virus activity in your area and take action to protect yourself and your family.

What should I do if I find a dead bird?
The Health Department is no longer testing dead birds for West Nile Virus but rather is focusing the surveillance effort on the mosquito population. Citizens who find a dead bird should place the carcass in a plastic bag and dispose of it in their regular trash, taking care to avoid handling the carcass by using gloves or other means to pick up the carcass. Hands should be thoroughly washed afterwards. West Nile Virus is not transmitted by contact with the carcass and these precautions are appropriate for dealing with any animal carcass.

How will I know if I have West Nile virus?
Fortunately, most people who are exposed to this virus will experience no symptoms of illness or they may experience only mild flu-like illness, such as fever, muscle aches, stiffness in the neck, headache or swollen lymph glands. The incubation period typically ranges from 3-15 days. Only in rare cases does this virus cause serious illness. Although this illness can affect people at any age, it tends to be most severe in the elderly, the very young or those with chronic illnesses or weakened immune systems. Persons experiencing severe symptoms should consult their personal physician promptly.

Goal
The City practices integrated mosquito control with the intent to disrupt the mosquito life cycle in its early stages to eliminate the number of adults and mosquito breeding habitats through proper water drainage. Mosquito control activities are conducted year-round but are increased from April through October, the most active mosquito season in North Texas.

How to Protect Yourself
Follow the Four D's of protection: