History and Spread of Zika

The Zika virus, originally identified in 1947 from the Zika forest of Uganda, is transmitted to people primarily through the bite of an infected Aedes species mosquito. These mosquitoes are found throughout tropical regions of the world and are the same mosquitoes that spread the dengue and chikungunya viruses. Mosquitoes become infected with the Zika virus when they feed on a person already infected with the virus. Infected mosquitoes can then spread the virus to other people through bites. There is no vaccine to prevent or medicine to treat Zika virus infection.

Local, state and federal health agencies are monitoring the spread of Zika virus through reports of possible human cases since the Zika virus must first be introduced into a mosquito population by someone who is infected.

If a positive case for the Zika virus is reported in the community, Richardson Health Department workers will follow Centers for Disease Control protocol by treating the area for mosquitos in and around the home of the individual or individuals reported. Because the mosquito connected with carrying the Zika virus does not travel far, the area is treated to significantly reduce the mosquito population of those mosquitoes that may have come in contact with an infected individual.

Visit a doctor if you have recently traveled abroad to areas where the Zika virus is reported and are showing symptoms.

The Zika virus can be transmitted in the following ways:

Through Mosquito Bites
The Zika virus is transmitted to people primarily through the bite of an infected Aedes species mosquito. These are the same mosquitoes that spread dengue and chikungunya viruses. These mosquitoes are aggressive daytime biters but can also bite at night.

From Mother to Child
A pregnant woman can pass the Zika virus to her fetus during pregnancy. To date, there are no reports of infants getting the Zika virus through breastfeeding.

Through Blood Transfusion
As of Feb. 1, 2016, there have not been any confirmed blood transfusion transmission cases in the United States but there have been multiple cases reported in Brazil. 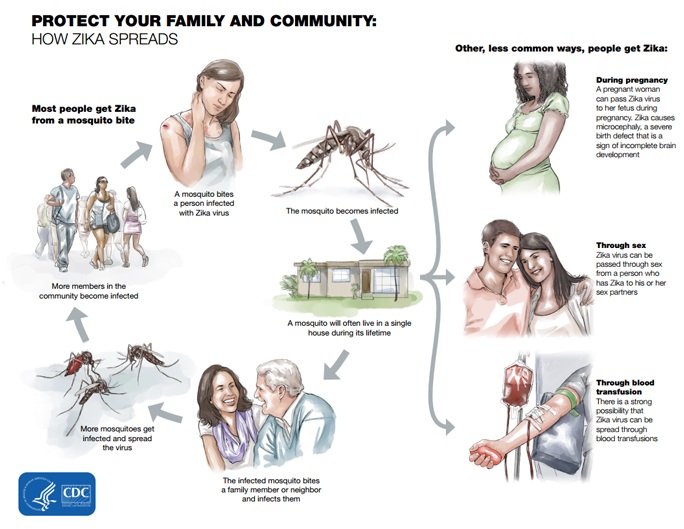 Approximately 80 percent of people infected with the Zika virus do not become ill. For those who do develop symptoms, illness is generally mild and typically lasts a few days to a week. The most common symptoms of Zika virus disease are fever, rash, joint pain and conjunctivitis (red eyes). Other common symptoms include muscle pain and headache. The incubation period (the time from exposure to symptoms) for Zika virus disease is not known, but is likely to be a few days to a week.

Women who are pregnant should not travel to areas with Zika. If you must travel to one of these areas, talk to your healthcare provider first and strictly follow steps to prevent mosquito bites during your trip.

The U.S. Centers for Disease Control and Prevention (CDC) is currently advising pregnant women to delay travel to foreign countries where Zika is being transmitted. To prevent the spread of the disease, people traveling to those areas should carefully follow steps to avoid mosquito bites while there and for seven days after returning home.

The Centers for Disease Control and Prevention have several recommendations for women trying to become pregnant. For more information and steps to protect yourself, please visit the "For Pregnant Women" section of the Official CDC Zika Website.

There is no vaccine to prevent or medicine to treat Zika infections.

Goal
The City practices integrated mosquito control with the intent to disrupt the mosquito life cycle in its early stages to eliminate the number of adults and mosquito breeding habitats through proper water drainage. Mosquito control activities are conducted year-round but are increased from April through October, the most active mosquito season in North Texas.

How to Protect Yourself
Follow the Four D's of protection: