How to Donate
About the Barkway
The Bush Central Barkway is Richardson's retreat for residents and their four-legged family friends. The six-acre site is located under and along the President George Bush Turnpike just west of US 75 and includes separate areas for large and small dogs as well as space for sedentary dogs. A rental area is also available for private events.

The addition of a dog park in Richardson has been a top priority for the City for several years, and was identified as the fourth most-needed park facility in Richardson's 2010 Parks and Recreation Open Space Master Plan.

Construction of the Bush Central Barkway began in December of 2014 and our Grand Opening took place in July of 2015. 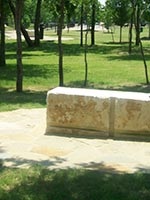 Richardson dogs will finally have a place of their own to run, play and enjoy all the park has to offer. But as a dog owner, you might prefer to sit back, relax and watch them blow off some energy. Your donation will help provide 23 long-lasting limestone benches throughout the Barkway. These benches will provide convenient seating, stand up to the elements, and provide a beautiful visual appeal in line with the overall design of the Barkway. 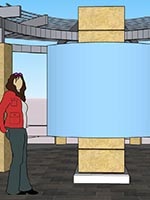 Your donation will help provide an information kiosk at the Barkway. This custom structure will provide a new communication channel for Barkway patrons to see important civic and Barkway related information. In keeping with the overall design of the Barkway, this structure will be constructed out of beautiful limestone and durable steel and will display information behind a clear protective cover.