The playground also includes concrete walkways and an extensive ramp system, which provides access to decks, climbing equipment and slides. The playground is open daily, sunrise to sunset. 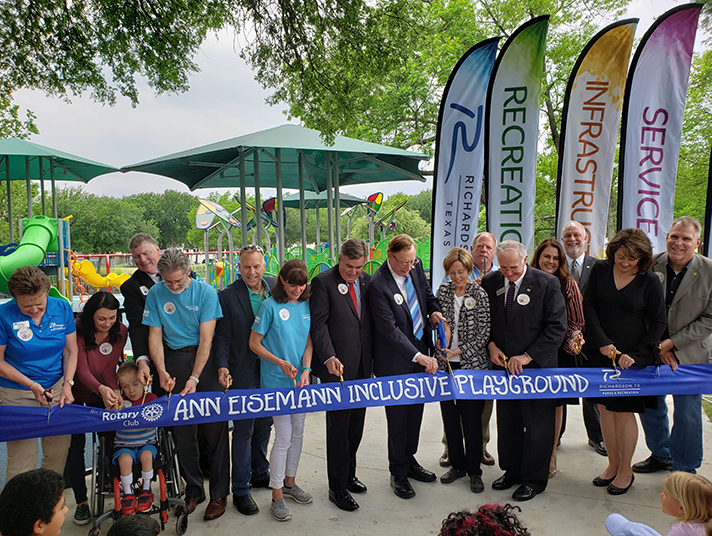 The idea for an inclusive playground in Richardson was generated in 2015 when Richardson East Rotary Club (RERC) approached the City of Richardson regarding their interest in doing a “Signature Project”. The criteria for the project was that it needed to be unique, create a long-lasting community impact and be something that the club could be involved with long term. From that was born the idea of an inclusive playground and a sensory garden, with Cottonwood Park selected for the location. In addition, the club planned to host an annual “Picnic for the Playground” to bring awareness to the project.

An agreement to work in partnership on the playground was finalized in June 2016. Richardson East Rotary Club took on the responsibility for raising $250,000 to add to the city’s playground replacement bond funds which were approved by voters in 2015. A playground steering committee was formed in September 2016 including RERC members, city staff, those with specialties in pediatric physical therapy and therapeutic recreation, a parent and others who had special interest in the project. “Make it Happen” became the theme of the campaign with RERC and the playground committee working tirelessly to bring the playground to life. GameTime was selected as the equipment provider which led to the generation of concepts. The Richardson City Council provided its support of the project in February 2017 and announcement of the project was made days later.

Following successful community-wide and grassroots level fund raising efforts to reach the initial goal, RERC challenged itself to do more to enhance the playground and make it even more special. A new goal was set for $500,000 and the momentum continued. Adding to the campaign’s success was the generosity of Ann and Charles Eisemann , contributing to the project as the naming rights donor with an additional incentive to include a new fully accessible restroom near the playground. By December 2018, RERC had successfully met its fundraising goal. The funds raised, paired with the city’s contributions, made the expanded vision of the inclusive playground possible. The ground breaking for the Ann Eisemann Inclusive Playground was held on January 13, 2019 and the ribbon cutting was held on
April 23, 2019.

Richardson East Rotary Club will maintain the sensory garden and will continue to produce its annual “Picnic at the Playground” each June.

Thank You For Making It Happen!