The Cotton Belt Rail Line has been on DART’s Rail Plan since 1983 and is a key piece of Richardson's future transportation network. A number of years ago, the economy required DART to move construction of the Cotton Belt to the 2035 time frame. However, DART has reanalyzed its financial capacity and determined that with the use of Federal Railroad Agency rail infrastructure financing, they can move the implementation date up to 2022. 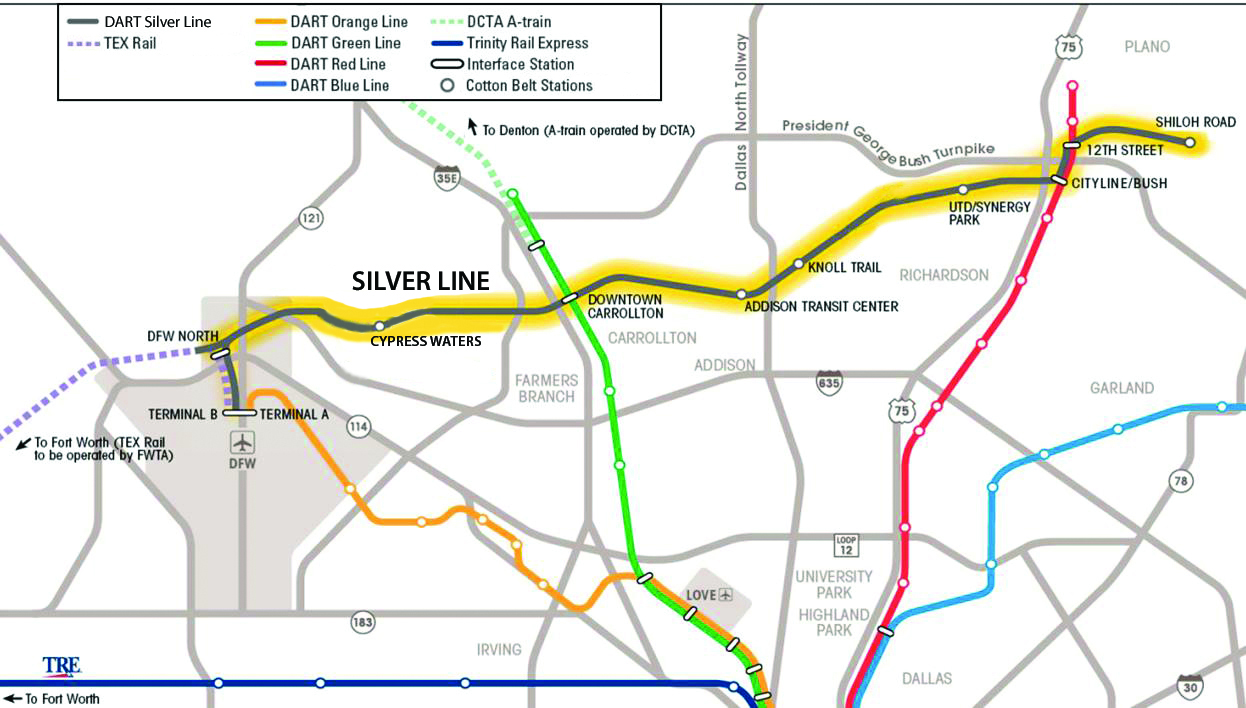 The 53-mile rail corridor will connect Richardson to Dallas/Fort Worth International Airport, downtown Fort Worth and beyond. The Cotton Belt Rail Line will provide Richardson residents, businesses and visitors better access to most parts of the Metroplex. From the CityLine/Bush Station connection where it will interface with the Light Rail Red Line, the Cotton Belt line will move to the north and east into Plano. To the west, the Cotton Belt will connect to the DART Light Rail Green Line in Carrollton, the Denton County Transportation Authority A-train, D/FW Airport and downtown Fort Worth.

The "cross town route" will augment the hub & spoke pattern of existing DART light rail routes. In Richardson, the Cotton Belt will stop at a new platform at the existing CityLine/Bush station, as well as at a new UT Dallas station. A new bridge will also be built over US 75 in Richardson

Richardson has always played a significant role in fostering regional mobility. The Cotton Belt corridor expands Richardson’s access to the regional multi-modal transportation network. Multi-modal regional access has long been valued as an essential component of Richardson’s success and continuing sustainability—a combination of road, rail, and trail. Richardson has invested significant time and resources to assure Transactional Infrastructure is in place to leverage investment and improve quality of life.

The Dallas Area Rapid Transit board unanimously approved an $815 million contract on December 11th for construction on the Cotton Belt Rail Project. The contract was awarded to rail builder Archer Western Herzog 4.0 and the federal loan that will finance construction closed December 20.

In a separate vote, the board unanimously approved a $49.2 million contract for WSP/AZ&B to act as the program manager/owner’s representative for the project

Design work is expected to take 6-8 months, followed by utility relocation and foundation work for bridges. The board plans to make decisions in January 2019 regarding whether to fully double-track the project or add a second track to a three-mile area of Far North Dallas, with either option keeping the project within its budget.

Completion of the Project is expected in December 2022.

The DART board of trustees voted Oct. 25, 2016, to pass a 20-year financial plan that includes funding for the Cotton Belt Line and a downtown Dallas subway.

Earlier in October 2016, Richardson City Council Members were joined at a DART board meeting by representatives from UT Dallas, State Farm, Methodist Hospital, the Richardson Chamber of Commerce, and several neighborhood associations, to speak in favor of the Cotton Belt Line and the benefits passenger rail service has brought to Richardson. Several of those supporters were present for the Board’s vote on Oct. 25.

At their Aug. 22, 2016, meeting, the City Council received briefings from City and DART staff regarding the status of the Cotton Belt Corridor.