Now, the NTMWD is authorized to acquire, treat and distribute potable water, and to collect, treat and dispose of wastes, both liquid and solid, in order to reduce pollution, conserve and develop the natural resources of Texas. Over 1.6 million people in 55 cities, towns, special utility districts and water supply corporations are served by the NTMWD which receives raw water from Lavon Lake, Lake Texoma, Jim Chapman Lake, Lake Tawakoni and the East Fork Raw Water Supply Project. 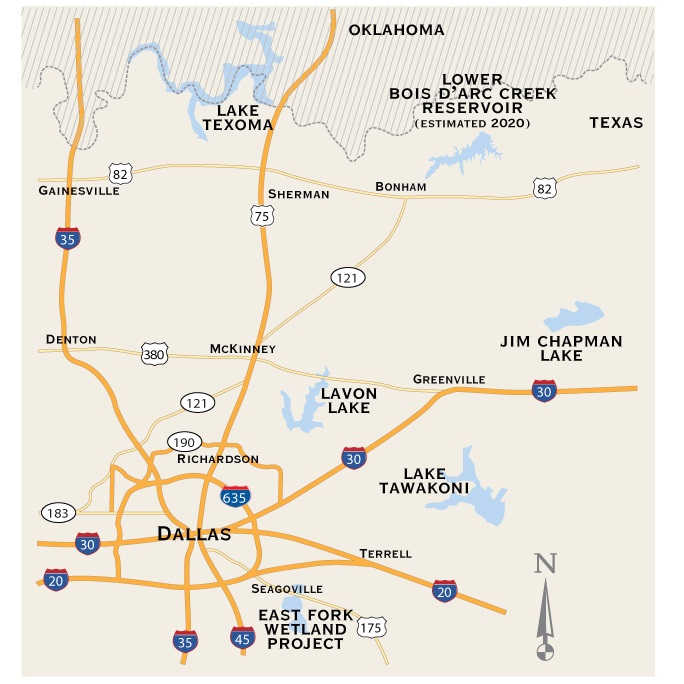 Lower Bois d’Arc Creek (LBCR) Reservoir
The Lower Bois d’Arc Creek Reservoir, once completed, will be the first major reservoir built in Texas in the last 30 years. It is being built to meet the growth needs through 2040. The LBCR will be owned and operated by the NTMWD. The primary purpose of the LBCR will be for water supply, and not for flood control and management. NTMWD is prepared to commence construction of the reservoir when the state and federal permits are received for the project.

East Fork Wetland Project
The North Texas Municipal Water District is meeting a pressing need for water with a unique and natural solution. In Kaufman County, plants, not machinery cleanse river water as it flows through lush man-made wetlands. Using this organic process, the wetlands help quench a thirst for water that is growing on a massive scale. This project provides over 102,000 acre-feet of water per year which is the same capacity of water supplied by Lake Lavon. Completed in 2009, this project consists of diverting water from the East Fork of the Trinity River and polishing the water in one of the largest constructed wetlands in the country (1,840 acres). After passage through the wetlands, the water is pumped through an 84” pipeline, 43 miles north of the wetland site to Lake Lavon for storage, blending and water supply use.

Click here to read Consumer Confidence Reports on the quality of the City’s water.

What is the North Texas Municipal Water District?
The North Texas Municipal Water District (NTMWD) can be considered a co-op distributor of treated water for use by several “member” and “customer” cities in North Texas. The NTMWD was developed as a political subdivision of the State of Texas and is governed by a board of directors appointed by the member cities. The District is responsible for acquiring, treating, and distributing potable water, and to collect, treat and dispose of waste water, both liquid and solid, in order to reduce pollution, conserve and develop the natural resources of Texas.

What’s the difference between member and customer cities?
There are three main differences:

I understand that we are paying for water that we are not able to use through a system known as “take or pay.” What is that?
Under the North Texas Municipal Water District (NTMWD) contract, cities pay for water based on their greatest single year of usage. In 2002, Richardson used11,019,311,000 gallons of water, at a time when its population was booming. Since then, the city has been required to purchase that amount every year, even though the community has not reached that consumption level since.

Why do we use the “take or pay” system?
In the 1950s our region experienced an historic drought. Many communities in Collin County, with a population of only 42,000 came together to form the NTMWD. The founding cities and other neighbors who later became member cities, were all small, agriculture-based communities that needed to work together to secure a resource that would be vital to future growth. In order to meet peak demands, NTMWD builds infrastructure and acquires water to supply the member cities. The revenue received from its member cities and customers pays for the infrastructure in place and for future needs.

How much has Richardson spent on water that we did not use?
In the last three years, Richardson has paid for 9,916,295,000 gallons of water that its residents and businesses did not use, resulting in approximately $18.8 million in water that the city was not allowed to use due to the need to meet water conservation goals set during the most recent drought. Because the “take or pay” system goes against encouraging conservation, the City of Richardson is joining other cities to work with the District to address the pricing structure for water.

What is Richardson doing to promote change to the “take or pay” contract?
The City of Richardson supports an initiative being set forth by the North Texas Municipal Water District (NTMWD) to create a series of meetings designed to work with the member cities to discuss and develop a more equitable and sustainable rate structure for water service. These meetings are anticipated to begin in late 2015.

What does Richardson hope to gain from a contract change?
The long-term goal for changing the contract is to develop a more equitable level of billing based on usage as opposed to paying for water based on our greatest single year of usage. Under the current contract, this rate can only go up. It can never adjust down. NTMWD member cities are asking to work with the NTMWD to re-evaluate the water rate methodology to account for water conservation needs. The hope is that an approach will be developed that supports responsible conservation practices, while also starting to limit the large percentage cost increases experienced during the last several years.

How much water is Richardson using compared to how much it is paying for?
Richardson currently uses approximately 65 percent of its total water purchase from the North Texas Municipal Water District. The cities maximum contribution was set in 2002 during a period of high growth and no water restrictions.

Why does the district continue to charge if it’s asking us to use less?
The recent severe drought put the North Texas Municipal Water District in a position it had never been in before, where its customers were mandated to conserve water. Conservation of water was never foreseen as a necessary measure 60 years ago when the contracts were first created. In addition to that, the needs of the cities that formed NTMWD have changed. Collin County now has more than 780,000 residents and is projected to reach more than 1.5 million. Five member cities – Richardson, Plano, Frisco, Allen and McKinney – have populations over 100,000. Some member cities are projected to reach more than 300,000, while others are largely built-out. Small family farms have given way to residential, commercial, and industrial developments, resulting in a Collin County that no longer resembles the agriculture-based community of the 1950s. Growth balanced with the needed implementation of permanent conservation measures has created the desire to redefine the billing system to a more equitable and sustainable system.

Why not just use more water, since we are paying for it anyway?
The recent drought has shown the need for regional and local emphasis on conservation. Stage 4 water conservation measures were able to be avoided because of the decrease in demand created by water restrictions. If water were used anyway, then the supply would have reached dangerous levels which could threaten the economy of our entire region. The goal is to be responsible with water use and to design an approach that is right for our future.

Can the North Texas Municipal Water District continue to provide water and develop new reservoirs if the rate structure is changed?
There are many different contract options that can offer solutions while addressing NTMWD’s financial obligations. The City of Richardson is supportive of working with other member cities to develop a rate structure that will support current needs and promote growth to cover future demand.

Some have suggested that the payments the member cities make under the contract are similar to a mortgage. Is the contract similar to a mortgage?
This analogy is not comparable to water payments by member cities. A typical mortgage has a 15, 20 or 30 year term where an individual pays on a house while having exclusive use of the house. At the end of the term, if all payments have been made, the individual will own the home and no longer has to make payments for the house. Additionally, individuals can renegotiate the terms of the mortgage if they can find a willing lender. Finally, if financial circumstances change, individuals have options: They could choose to rent a room, lease the house and, if all else fails, sell the house.

In contrast, the water contract has no definite term, because member cities are obligated to pay for the debt of the District. Every time new debt is issued, the term of the contract is extended. At the end of the term, the member cities do not own any asset, since the contract is for a service. Each August 1st the water service contract resets and member cities pay in full for a contractual minimum amount of water that they are restricted from utilizing. If that water is not taken by July 31st, the water is available for NTMWD to sell the next year. The cities are paying for a service and not an asset.

What is the water rebate?
At the end of their fiscal year, the North Texas Municipal Water Districts' Board of Directors vote to grant a rebate to the cities for unused water. The rebate represents the cost of chemicals and electricity they did not incur for treating or pumping water the cities did not use. For Fiscal Year 2013-2014, the City of Richardson received a rebate of $1.6 million. That sum equals $0.45/1,000 gallons for the approximate 3.6 billion gallons of water the City did not use.

What’s in the future for Richardson taxpayers if the contract doesn’t change?
The District is taking final preliminary steps to build Bois D’Arc Lake, a $1 billion project. This undertaking will necessitate 30 to 50 years of debt. For Richardson, that translates into an approximate 10% increase in the city’s wholesale water rates every year for the foreseeable future while water conservation measures will continue to restrict water usage into the future.

NTMWD Water Treatment Process
NTMWD provides water treatment and delivery at the water treatment plants owned and operated by the NTMWD. In addition, the NTMWD owns and operates the transmission pipelines, pumps, and storage reservoirs necessary to deliver the treated water to Members and Customers in sufficient volumes to meet the daily demands of the citizens served.

The graphic below illustrates the treatment process. 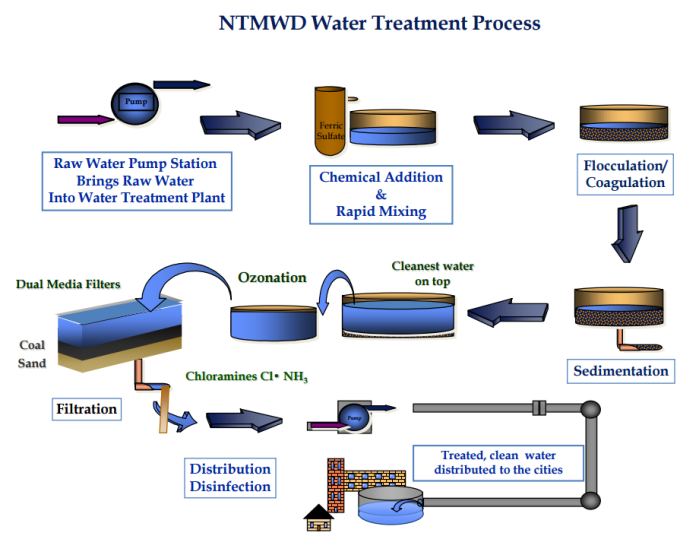 NTMWD Wastewater Treatment Process
This process removes large objects from the wastewater by passing the wastewater through screening devices made of metal bars or perforated metal plates. Pass-through openings in these screens are as small as 6 millimeters. Grit classifiers then remove sand that can cause excessive wear on equipment and deposit in unites downstream. Then, in large basics called Primary Clarifiers, the process settles out solids that are heavier than water. These solids are pumped from the bottom of the clarifiers to the dewatering process. To learn more about the additional steps involved in this process click here. 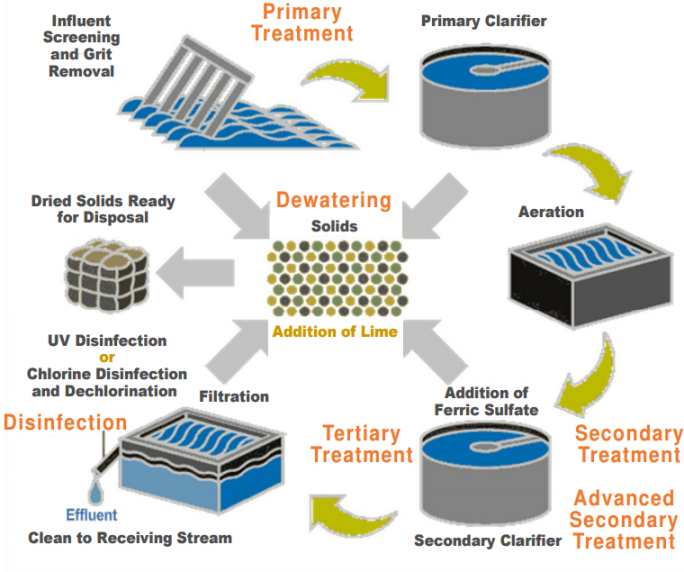 The Texas Commission on Environmental Quality (TCEQ) allows water suppliers to perform chlorine maintenance in order to maintain proper chloramine levels (required by the TCEQ) during the warm weather periods, thus conserving water. The chloramines, a combination of chlorine and ammonia, are used to provide the disinfectant residual in the transmission and distribution systems as required by the TCEQ. Chloramines provide a longer lasting residual disinfection in the water pipelines and water storage facilities.

The chlorine maintenance does not affect water quality, and remains safe for use. Consumers who are sensitive to taste and odor changes in drinking water might notice a slight change during this period, however this palatability change does not alter the quality of the drinking water. For more information, visit www.ntmwd.com.