ARTICLE I. CODE OF ETHICS 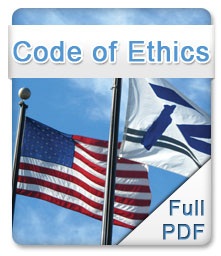 It is hereby declared to be the policy of the City that the proper operation of democratic government requires that public officials be independent, impartial and responsible only to the people of the City; that no officer shall permit any interest, financial or otherwise, direct or indirect, or engagement in any business, transaction or professional activity to conflict with the proper discharge of such person’s duties in the public interest; that public office not be used for personal gain; and that the City Council at all times shall be maintained as a nonpartisan body. To implement such a policy, the City Council deems it advisable to enact a Code of Ethics for officials, as defined in this article, whether elected or appointed, paid or unpaid, to serve not only as a guide for official conduct of the City's public servants, but also as a basis for discipline for those who refuse to abide by its terms, the overriding interest being that such officers of the City shall at all times strive to avoid even the appearance of impropriety.

The following words, terms, and phrases, when used in this Section, shall have the meanings ascribed to them in this Section, except where the context clearly indicates a different meaning.

Business entity means any person, entity, corporation (whether for-profit or nonprofit), general or limited partnership, sole proprietorship, joint venture, unincorporated association or firm, institution, trust, foundation, holding company, joint-stock company, receivership, or other entity recognized by law, whether or not organized for profit, which has an economic interest, or seeking such, in conducting business with the City. Business entity also includes any business entity that represents a party conducting or seeking to conduct business with the City.

City Council means the governing body of the City.

Contract means any lease, claim, account or demand against or agreement with any entity or person, whether express or implied, executed or executory, oral or written.

Employee means any person employed by the City, including those individuals on a part-time or internship basis, but does not include independent contractors.

Gift means anything of value, regardless of form, offered or given in the absence of adequate and lawful consideration. It does not include the receipt or acceptance of campaign contributions which are regulated by federal, state, and/or local laws or ordinances.

Officer or official means any member of the City Council and any appointed member of a City board, commission or committee established by ordinance, Charter, state law or otherwise, on a temporary or permanent basis, operating either under the direct or indirect authority or subject to either the direct or indirect control of the City Council. Such term includes but is not limited to the members of the City Plan Commission, the Board of Adjustment, the Building and Standards Commission, the Tax Increment Reinvestment Financing Zone Boards of Directors, the Civil Service Board and Appeals Board, the Library Board, the Parks and Recreation Board, the Arts Commission, Animal Shelter Advisory Board, the Environmental Advisory Commission. Such term also includes the members of the boards of directors of Corporations, such as the Richardson Improvement Corporation.

Relative means any person related to an officer within the second degree by consanguinity or affinity. This relationship includes the spouse, parents, children, stepchildren, father and mother-in-law, or son and daughter-in-law, grandparents, grandchildren, sisters and brothers of the officer.

Special privileges means a right, advantage or favor of or for a particular person, occasion or purpose not otherwise available to others.

No officer of the City or a relative thereof shall:

Any officer, who has a substantial interest in any matter pending before the body, board, commission, corporation or committee of which the officer is a member, before a vote or decision on such matter, shall file an affidavit stating the nature and extent of the substantial interest, and shall abstain from further participation in such matter. The affidavit shall be on a form provided by the City and must be filed with record keeper for such body, board, commission, corporation or committee.

The City Council may take any one (1) or more of the following actions in an open meeting concerning a complaint:

Any officer may request and the City Attorney shall issue, a verbal or written opinion (as deemed appropriate) concerning the meaning or effect of any section, word, or requirement of this Code of Ethics as it affects such person.

The City Council shall review this article once every two years following its adoption on September 27, 2010.

SECTION 2. That should any sentence, paragraph, subdivision, clause, phrase or section of this ordinance be adjudged or held to be unconstitutional, illegal or invalid, the same shall not affect the validity of this ordinance as a whole, or any part or provision thereof other than the part so decided to be invalid, illegal or unconstitutional, and shall not affect the validity of the Code of Ordinances as a whole.

SECTION 4. That this Ordinance shall take effect immediately from and after its passage, as the law and Charter in such case provide.

DULY PASSED by the City Council of the City of Richardson, Texas, on the 27th day of September 2010.