Mayor Paul Voelker reported that the state of Richardson is strong at this year’s State of the City Address, a free and open-to-the-public event held at the Eisemann Center Wednesday, January 27. He recognized many of the success stories that occurred in Richardson in 2015 and highlighted some great things the City is looking ahead to in 2016. 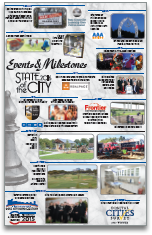 State of the City Timeline

Economic Development
This fiscal year the City Council unanimously approved an increase in the economic development fund to six-tenths of one cent out of the City property tax rate to build a business development war chest. This fund will help level the playing field and strengthen the City’s position as it continues efforts to attract quality economic development.

Among the newest members to Richardson’s corporate community are State Farm and Raytheon, located at CityLine, a new $1.5 billion development situated near the crossroads of US 75 and the Bush Turnpike and located adjacent to DART’s Bush Turnpike light rail station. CityLine has attracted a unique assortment of services, such as the high-end Aloft Hotel, a new Whole Foods grocery store and a long list of unique dining options, along with Children’s Medical Center and Texas Health Resources.

Just to the south, along Central Expressway near Spring Valley, Richardson Restaurant Park is under construction. The project was made possible with economic development incentives from the City and is an outgrowth of the reinvestment and redevelopment strategy for the West Spring Valley Corridor. An agreement has already been inked with The Rock Wood-Fired Kitchen and Dog Haus is opening a restaurant at the site. Negotiations with other national restaurant groups and local one-of-a-kind chef-driven concepts are underway. Doors will open sometime this summer.

Last year, nearly 4,000 jobs were created in the City as a result of leases signed by RealPage, Frontier Communications and GEICO, with assistance from Richardson’s economic development partners at the Chamber of Commerce. Richardson continues to be one of the best locations in the Metroplex for corporate relocations and expansions.

Infrastructure
During the past three years, as the local economy has grown, the City Council has steadily increased funding to focus on streets, screening walls, bridge railings, traffic signs and pavement markers.

The passage of the new 2015 Bond Program brings $115 million in investment to the Richardson community, and more improvements are on the horizon.

Some projects included in the 2015 Bond Program:

A program that sets Richardson apart from the rest is its game-changing Home Improvement Incentive Program (HIIP). This program has allowed the City to leverage private dollars to promote community redevelopment and reinvestment. By providing a one-time incentive payment equal to 10 times the amount of the increase in City property taxes, HIIP spurred more than $27 million in new home construction or remodels in 2015 alone and more than $70 million total since its inception in 2007.

Public Safety
The Richardson City Council has always placed an importance on providing a level of support necessary to maintain one of the most well-trained and well-equipped police and fire departments in the Metroplex.

The City has experienced tremendous growth over the last year and to enhance public safety, this year’s budget includes funding to staff a new ambulance and to add five positions in the Police Department. Among the new hires is a new position called the Public Safety Officer, who will assist with less urgent calls such as stranded motorists, minor car accidents, and taking reports in the field from incidents, freeing up other officers for some of their more demanding tasks.

The City also continues to support infrastructure improvements that build on the Richardson Fire Department’s Class 1 Insurance Services Office rating. The ISO rating is used to measure the quality and effectiveness of fire protection, and Richardson has the highest rating attainable.

Community Experience
Having a responsive and customer-oriented City government is a primary goal for the City Council. First impressions make a difference and City staff welcome the opportunity for one-on-one interactions with residents at City Hall or other City facilities.

Being responsive to the community’s desire to achieve bigger things, like new parks or community initiatives, is also part of the plan.

The following are just some of the City’s “Community Experiences” in 2015:

Education
Companies need educated workers and employees want quality educational opportunities for their families, and Richardson is at the crossroads of some of the best educational programs available in the Metroplex.

The University of Texas at Dallas specializes in producing graduates in the fields of engineering, computer science and bio-technology, among an assortment of many other degrees and fields of concentration. Richardson is one of the few places in the Metroplex where an individual can make the journey from pre-school to PhD without ever leaving City borders.

The Richardson and Plano Independent School Districts have long-standing reputations for educational excellence, and are continually recognized at both the state and national levels. In recognition of the Telecom Corridor® area’s demand for high-tech education, both districts have a long history of building STEM programs that cultivate technical expertise, even at the elementary school level.

Richland and Collin College coordinate with RISD and PISD to offer dual credit enrollment to high school students, so that teens preparing to attend college can earn early credits.

Richardson’s access to excellent educational institutions is a key contributor to many career and employment opportunities available in the City.

Health
In the 1960s, the City Council planted the seeds for the growth of health care in Richardson by creating the Richardson Hospital Authority. Six years ago, Methodist Health System took over its efforts and continues to work with the City to grow health care services. That partnership continues to mature, and last November the Methodist Foundation recognized the City for its many contributions with its Legacy Award.

Methodist Richardson Medical Center continues to expand its services with advanced cardiovascular and neuroradiology suites, extensive outpatient services focused on minimally invasive treatments, and the adjacent Cancer Center with leading-edge diagnostic and treatment technologies. Less than one year after opening, the facility is already undergoing an $8 million expansion to increase the number of patient beds by 20 percent.

A new medical facility also opened late last year within the CityLine development. Texas Health Resources and Children’s Health Pediatric Group now operate a threestory, medical office building located at the southwest corner of Plano Road and Bush Turnpike. This facility will focus on health services to support the more than 10,000 people who will soon work at CityLine and will also offer specialized pediatric services.