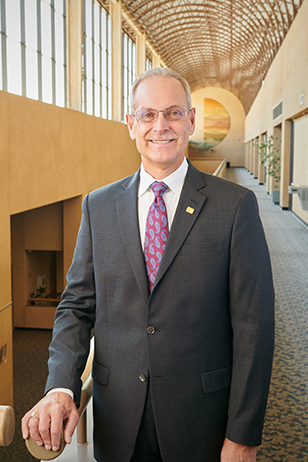 Ken Hutchenrider was elected to the City Council in May 2019. He has been actively involved in the community and has served as the chairman of the Richardson Chamber of Commerce, served on the City of Richardson TIF Board and was president of the Plano Independent School District Foundation. Professionally, Hutchenrider has served as President of Methodist Richardson Medical Center since July 2010. Under his leadership, the hospital joined the Methodist Health System and a new $120 million hospital was constructed with subsequent expansions. Additionally, Hutchenrider oversaw the development of a new wound care center and a Level III NICU as well as the development of a Da Vinci surgical program. During his tenure, Methodist Richardson has received numerous accreditations including a Chest Pain Center and a Stroke Center and achieved nursing Magnet Status as well as Pathway to Excellence. Hutchenrider is president of the RISD Health Science Advisory Council, president of the Texas A&M University Former Medic Association, regent for Northern Texas for the American College of Healthcare Executives and chairman of Saint Joseph Catholic Church Pastoral Council and director of ushers. He has received the American Heart Association SOAR Award, the Community Health System Outstanding Achievement Award, Fellow and Service Award of the American College of Healthcare Executives and 2018 Education and Workforce Hero Award from the Richardson Chamber of Commerce.

He holds a Bachelor of Business Administration from Texas A&M University, a Masters of Healthcare Administration from the University of Houston, Clear Lake, and a Honorary Degree for Community Service from Ivy Tech College. Hutchenrider and his wife, Melinda, have two daughters. He is also a private pilot.