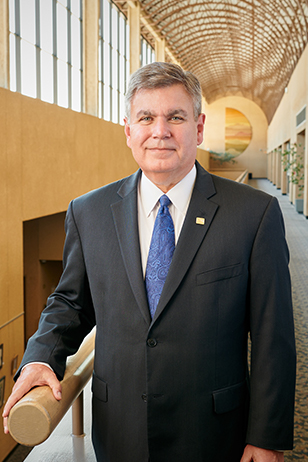 Paul Voelker was appointed to serve as Mayor of the City Council in May 2015, was elected as Mayor in May 2017 and re-elected in May 2019 and has served on the City Council since 2013. As the official head of the government he is the presiding officer, votes on all matters coming before council and represents the city during all ceremonial occasions.

His additional council duties include serving as the official community representative for economic development and activities, including many that are organized through the Mayor’s Office of International Business Development. The office is operated by the Chamber of Commerce through the Richardson Economic Development Partnership with the City of Richardson. Voelker also represents Richardson on the Regional Transportation Council. This serves as the Metropolitan Planning Organization (MPO) hosted by the North Central Texas Council of Governments for which the Mayor has served as an Executive Director. He is also a member of the Leadership Richardson Alumni Association and serves on the Richardson Chamber of Commerce’s Ex-Officio Board after having served as the Chairman of the Board in 2006. In addition, Voelker is also an Ex-Officio member of the Leadership Richardson Advisory Board and is a member of the Richardson Police Department’s Breckinridge West Active Crime Patrol.

Mayor Voelker’s past positions include serving as President and Vice President of the Metroplex Mayors Association, service on the Texas Governor’s IT Cluster Committee under the Texas Workforce Commission, Ex-Officio Board Member of the Metroplex Technology Business Council (Tech Titans), Tri-Chair of the MTBC Technology Luncheons Committee, service on the Richardson Zoning Board of Adjustments and President of the Reserve at Sharp Lane Homeowners Association.

Voelker’s involvement in local education includes past board memberships on the Richardson Independent School District Tomorrow Foundation and the University of Texas at Dallas Jonsson School Industrial Advisory Board Executive Committee. Voelker received a Bachelor of Arts degree in Business Administration from William Penn University in Oskaloosa, Iowa in 1983. He is a sales and marketing professional in the Information Technology and Communications industry and has over 30 years of experience working in Richardson’s Telecom Corridor® area. He is also a graduate of Leadership Richardson Class XVI. He and his wife Kris have one son.