Residents not registered to vote must submit their voter registration application (postmarked by Feb. 3) to the Voter Registrar of the county they reside in order to vote in the March 3 election. Voter registration cards are available in the City Secretary’s office at Richardson City Hall or the Texas Secretary of State website at www.sos.state.tx.us/elections/voter/reqvr.shtml.

The next City Council Election will be Saturday, May 1, 2021.

Everything you need to know about Vote Centers can be found on the Dallas County Voters website.

Richardson City Council
The Richardson City Council is composed of seven (7) members - six Councilmembers (Places 1 thru 6) and the Mayor (Place 7), elected by the qualified voters of the entire city to serve a two (2) year term. No person elected or appointed shall serve more than six (6) consecutive terms. The uniform election day for the City of Richardson is the first Saturday in May (odd years).
Council Districts
Candidates for Place 1, 2, 3, and 4 must reside in the corresponding district. Candidates for Places 5, 6 and the Mayor (Place 7) may reside in any portion of the City. Voters may cast ballots on all seven places. 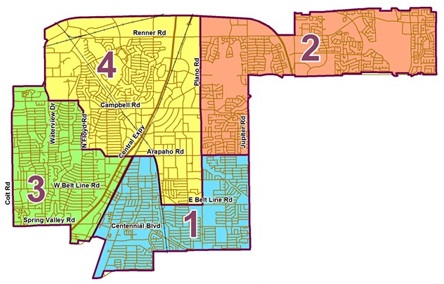