(1)Actuarial valuations are produced by TMRS on a calendar year basis and the City operates on a fiscal year ending 9/30. Valuations for a given year are used in the following year's City Comprehensive Annual Financial Report ("CAFR"). For example, the 2018 valuation was produced during the City's 2019 fiscal year and was used in preparing the City's 2019 CAFR. The 2018 valuation also set the contribution rate for use in calendar year 2020.

(2)The funded ratio for a pension is the value of pension assets divided by the value of the pension liability.  TMRS reports funding data to the City on both a market basis and a funding basis.  The market basis reports the fair market value of pension assets as of the reporting date (December 31 of the year of valuation for TMRS).  The funding basis smooths market gains and losses for pension assets over a period not to exceed ten years.  This treatment allows TMRS' actuary to set the City's contribution rates in a way that does not cause large spikes or declines in the rates year over year due to market fluctuations. The market basis is reported in the financial statements and footnotes of the City's CAFR.  The funding basis is included in the statistical section of the City's CAFR.

(3)Rates of return presented are calculated using a time-weighted rate of return methodology based upon market values, and are presented gross of investment management fees, as reported by TMRS. 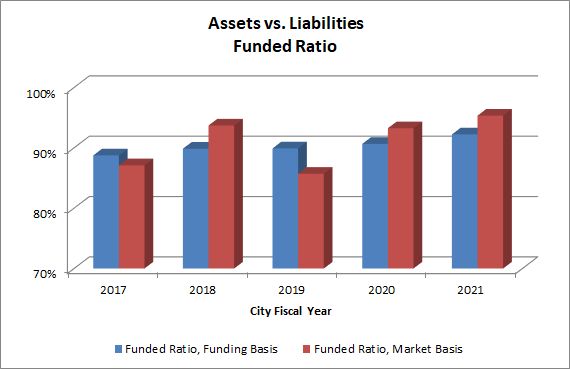 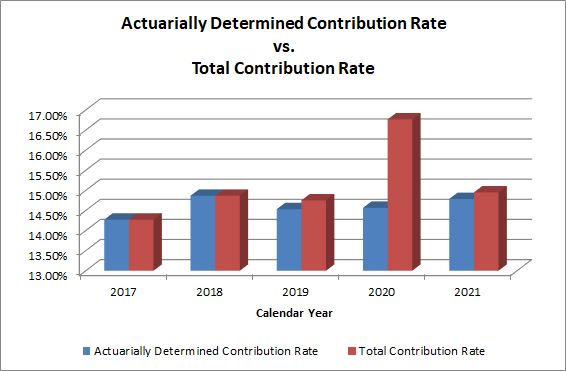 **Due to a change in GASB reporting requirements, the 2014 package, released in 2015, was the first year this report was produced.

Pension Fund Additions by Source and Deductions by Use Downloadable Data
Provides 5 years of data detailing the additions by source, such as investment income, employer and employee contributions, and deductions by use, such as benefit payments, withdrawals, and administrative expenses.