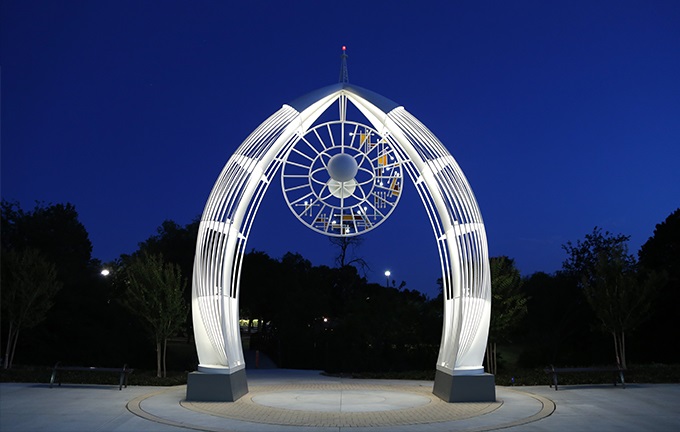 The “Rocket” is a three dimensional sculpture celebrating Heights Park history and the former playground pieces originally installed in the 1960s and removed in 2008 due to safety concerns. The art feature was presented during a ribbon cutting ceremony on May 28, 2013 when the new Heights Recreation Center was officially opened to the public and now serves as the gateway into Heights Park, completing a Heights Park Community Task Force recommendation to honor the former playground from its approximately 45 year history serving Richardson.

“Rocket” was created by artist Jeff Laramore, who was selected through a juried process where artists’ entries were placed in a competition to turn original playground equipment into an art work and return it to the park. Unfortunately, investigation of the metal from the original equipment revealed it was too fatigued and was deemed unsuitable for the public art piece. The replica art piece is very closely designed to the original “rocket ship” piece of playground equipment originally located at the park.

In 2008, a task force made of Richardson residents, Parks and Recreation staff, and playground professionals were put together to review needed updates to the iconic playground equipment (See Task Force Presentation). The playground was approximately 45 years old at the time and no longer met safety guidelines and accessibility legislation. Subsequently, Site Masters, a playground design and safety firm led by Teri Hendy and Human Nature, a landscape architectural services company, were hired as the Playground Design Team.

One of the first things the design team did was to hold a children’s focus group meeting in July, 2008. Children from local neighborhoods, ranging in age from pre-school to 12 years old, were given the opportunity to design and discuss the type of equipment they liked to play on at the park. Input from the children’s parents was also solicited at the meeting.

The design team took this information and developed concept plans for the playground. The plans were shown to the involved children and parents at a follow-up focus group meeting held in November, 2008 and the response was extremely positive. The final design plans were submitted by the City’s Parks and Recreation Committee to the City Council which approved the purchase of the new playground equipment at its Jan. 12, 2009 meeting.

Based on input from a children’s focus group meeting in July, 2008, the Site Masters playground design and safety firm developed a “Tree House” theme for the play- ground with an emphasis on nature. This playground was designed with two separate play areas with age-appropriate equipment. One area is meant for ages 2 to 5 and the second for the 5 to 12 age group.

Both play areas have swing sets and the area for older children also includes a tire swing. Fibar Systems® safety mats were installed under all the swings and slide exits.

For the “Nature Play” element of the area, two Woodland Series products were installed. The products are replicas of a fallen tree stump and a hollowed out standing tree stump. Children can crawl on, crawl in and crawl through the pieces. They are made of urethane foam and are formed and painted to replicate bark texture, knots, plant life, animals and insects on the surface of a decaying tree stump.

This area features a bridge across a dry stream bed with sand and boulders connecting the two areas. The dry stream bed adds a sense of exploration for the children without the added mess of water. Classically styled benches along a horseshoe-shaped sidewalk provide a central location for parents to sit and view both play areas.

This area features a two-story “Tree House” structure that has two tube slides that twist and turn down from the upper “lookout tower.” The lower level of the tower connects to another deck via a bridge and also has an open slide. There are also two rock climbing panels attached at the bottom of the main tower, a telescope feature and two lean out enclosures on the top level of the tower. A “space net” is also a popular piece of equipment for the older kids. This stand-alone piece has a single, 18-foot tall support post at the center with a series of ropes in a spider web pattern attached from the top of the post to four ground anchors that are set 32 feet apart. The ropes are positioned in a way that creates a safety net which is where the piece gets its name.